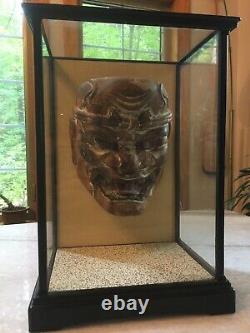 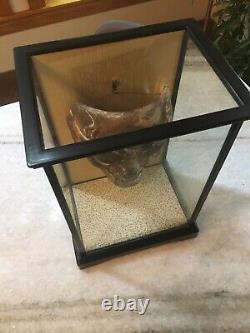 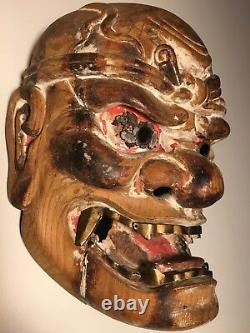 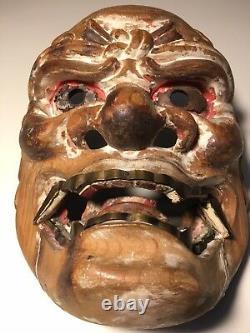 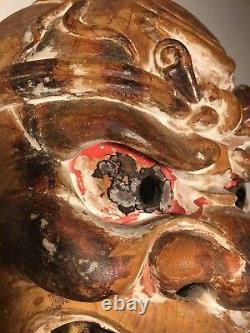 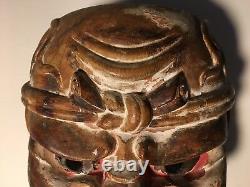 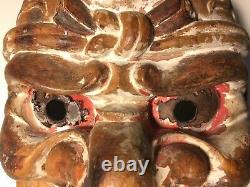 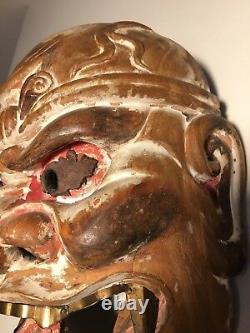 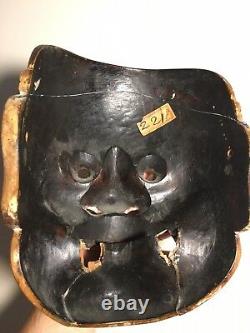 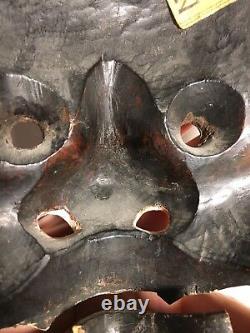 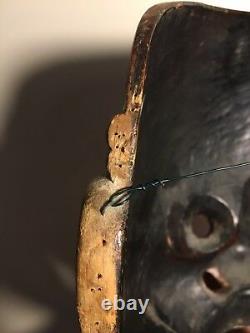 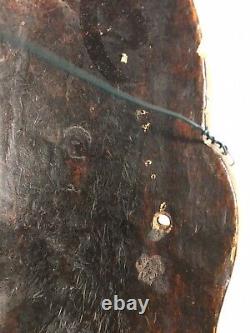 An extremely rare, antique, finely carved, ethnographic, used, Japanese wooden mask representing. A powerful Nio Guardian King which are often associated with the Naga Dragon Kings who converted to Buddhism and now act as bodyguards for the Buddha; a.

Ierce scowling face, furrowed brows and showing extreme agitation; expressive, masculine, rage.. Most often dark red in color... And showcase fanged teeth, crows-feet eyes, and deep creases of the forehead. Eyes and teeth are commonly painted in gold. In this example, the teeth are done in a bronze-gold metal.

Before Buddhism came to Japan over six centuries ago, people believed that giant and fearful devils lived in or near the mountains and the river. And on New Years Eve (February 3rd) everyone thought there may be extreme changes in the winter-climate. There were a ceremonies held to repel the demon from the shrine or temple, and this gradually became a custom among the general public. On the evening of New Years, people sing to ward off the evil spirit away and for good luck they scatter beans as a sign of the coming spring. See the Natural Museum in Japan to see what I mean about the unchanged techniques, natural pigments and difficulty in actually judging age.

Its also a reminder to us westerners that wooden masks actually can last this long.. Mask is highly aged as attested to the pronounced veins in the forehead, fine carving, patina on the reverse, and the time-loss of the go-fun (crushed oystershell mixed w/animal glues).. Hints of the mask's prior red paint are evidenced throughout. Minor loss to the back side of the tongue. Hasty repair done to the lower jaw; missing one nail to hold the metal teeth. Thinly carved, thick patina from wearing, and extreme attention given to the eye and nose carving on the reverse of the mask. Mask is donning a hachimaki (, or literally a "helmet-scarf") which is a stylized headband (bandana) in Japanese culture.

Usually made of red or white cloth, worn as a symbol of perseverance, effort, and/or courage by the wearer. The historical origin of hachimaki is uncertain. One theory links the cloth to those worn by early religious ascetics. Another theory states that they originated in headbands worn by samurai that kept their helmets on, to absorb perspiration, and keep hair out of their eyes. Perhaps the most well known usage of the hachimaki was by the kamikaze pilots toward the end of World War II; Kamikaze pilots would frequently don a hachimaki, usually with the kanji ("Kamikaze"), before flying to their deaths.

The sticker on the reverse of this piece is telling. I've seen these cira 1960s stickers before... Always placed on the same place on the mask... They are always on high-end, antique, Japanese masks... Presumbly artifacts from what once was a large, Japanese collection that has since been dismantled.

Are two wrathful and muscular guardians of the Buddha. Standing today at the entrance of many Buddhist temples in East Asian Buddhism.

In the form of frightening wrestler-like statues. The oldest and most powerful of the Mahayana.

According to Japanese tradition, they travelled with Gautama Buddha to protect him and there are references to this in the Pli Canon. As well as the Ambaha Sutta. Within the generally pacifist tradition.

Of Buddhism, stories of dharmapalas justified the use of physical force to protect cherished values and beliefs against evil. The Ni are also seen as a manifestation of Mahasthamaprapta. Of power that flanks Amitbha.

Two Ni who stand in the left (Ungy) and the right (Agy) of sanmon. Kongrikishi are usually a pair of figures that stand under a separate temple entrance gate usually called Nimon. In Japan, hngh èr jiàn g.

Symbolize the birth and death of all things. Men are supposedly born speaking the "a" sound with mouths open and die speaking an " " and mouths closed. Similar to Alpha and Omega. They signify "everything" or "all creation".

The contraction of both is Aum. , which is Sanskrit for The Absolute.

Bust of a Buddhist guardian figure, from China, Yuan Dynasty, 14th century CE. "A"-form, general term open-mouthed statues in aum pair, is a symbol of overt violence: he wields a vajra. Mallet " vajra-pi " (a diamond club, thunderbolt stick, or sun symbol). His mouth is depicted as being in the shape necessary to form the "ah" sound, leading to his alternate name, "Agy". Misshaku Kong is Miljeok geumgang in Korean, Mìj jngng in Mandarin Chinese, and Mt tích kim cng in Vietnamese. It is equivalent to Guhyapda vajra in Sanskrit. Narayeon Geumgang (Naraen Kong) at Hwa-Eom Temple.

His mouth is rendered to form the sound " h " or "Un", leading to his alternate name "Ungy". Naraen Kong is Narayeon geumgang in Korean, Nàluóyán jngng in Mandarin Chinese, and Na la diên kim cng in Vietnamese. A manifestation of Kongrikishi that combines the Naraen and Misshaku Kong into one figure is the Shukongshin at Tdai-ji. Wielding spirit, is Shkongshin or Shikkongjin in Japanese, Jip geumgang sin in Korean, Zhí jngng shén in Mandarin Chinese, and Chp kim cang thn in Vietnamese.

Kongrikishi are a possible case of the transmission of the image of the Greek hero Heracles. Heracles was used in Greco-Buddhist art to represent Vajrapani. The protector of the Buddha, and his representation was then used in China. And Japan to depict the protector gods of Buddhist temples. This transmission is part of the wider Greco-Buddhist.

The protector of the Buddha, depicted as Heracles in the Greco-Buddhist art. 4 Shukongshin of Buddhist temples in Japan.

The item "Antique, Ethnographic, Ni Guardian Kongrikishi Wooden Japanese Mask" is in sale since Thursday, January 4, 2018. This item is in the category "Antiques\Asian Antiques\Japan\Masks". The seller is "cosmic_goods" and is located in Freeport, Maine.