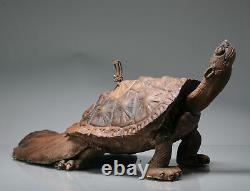 3500 "Make us an offer" Listings/. Antique Iwayaki Earthenware Edo Incense Burner of a Turtle 19th Century Japan, Japanese. Nicely made and large incense burner or Okimono of a turtle. In earthenware with nice patina.

Shimane Prefecture Iwayaki (Nagahama Yaki) Turtle figurine. The head and part of the back can be removed. Oki-mono is a Japanese term meaning "ornament for display; objet d'art; decorative object", typically displayed in a tokonoma alcove or butsudan altar. It is a work of Iwayaki (Nagahama-yaki), which is famous as a kiln for crafts about 200 years ago, and it is rare enough to say that it is a miracle even if it still exists, and among them, there are few products in such good condition.

It is a very rare work of art. Pottery that is handed down.

Mainly so-called crafts that are shaped like animals such as turtles, crabs, and monkeys, and soft pottery that is close to Raku ware. It is also called Nagami Iwayaki because Nagami Fusazo learned from the sculptor Iwao Shimizu, received the character of Iwao, and called it Nagami Iwao. Overall Condition 1 foot broke off and some ware and minimal frits. We can not control this. For China (& rest of Asia) & US allow at least 2 to 3 weeks.

Depending on the situation it can take up to 1.5 month. This also influences the tracking data shown online. You can follow it at. This item is in the category "Antiques\Asian Antiques\Japan\Vases". The seller is "theceramics_and_collectibles" and is located in this country: NL.