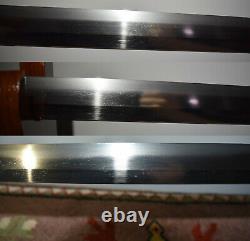 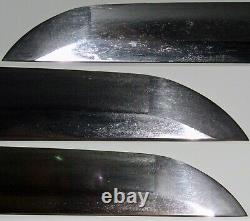 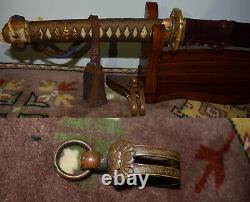 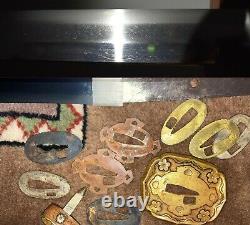 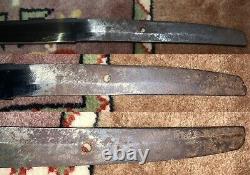 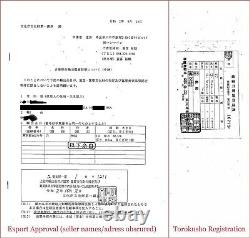 The sword was registered by a Japanese government Education Board after passing a Toroku-shinsa-kaijo in the year Heisei 7, with the Japanese governments Art and Craft Section of the Cultural Agency granting permission to export to the United States in 2020 (Picture 12). Notably torokusho are only issued to traditionally made Japanese swords. The sword has a ko-maru boshi along with a dense komokume hada replete with pools of gleaming black nie and lines of chikei, traits that along with its ko-nie suguha hamon suggest Hizen as a possible school of make. The nie based suguha hamon is readily visible throughout the blade, indicating good heat treatment and a durable blade. Unsurprising for a weapon that survived the still turbulent early Edo period and at least one world war. The sword is in an old war era Kesho polish, which while popular during the war years for preparing sharp, presentable blades not easily scared by use, does not show the full range of hamon activities an artistic sashikomi polish might. Although the details are still readily visible, an owner might elect to have a finishing polish done, a process that would surely be aided by the good foundation already present. The Nagako is ubu with a patina, no mei is discernible, the blade appears to have had its machi moved up when mounted in war fittings (machi okuri).

The original cutting edge length was likely about 70cm, after the machi okuri and fitting in war mounts it measures just under 67cm. No hagiri is present and the blade is in overall excellent condition save for a few shallow oxidation spots partly obscuring the kisaki's polish, some very fine horizontal scratches, and a shallow few vertical scratches on the side of the blade, likely caused by the softer sides being scratched when cutting a hard object. A spot of coarse forging exists near the munemachi.

All in all, an excellent opportunity to acquire a well-made Kanbun period sword, possibly from Hizen in healthy condition and a fairly good polish. The special-order Shin Gunto Koshirae itself is in unusually good condition and tells an interesting story: with tensions boiling over and war looming, the Japanese military attempted to invoke old traditions as a way of inspiring patriotism; Ergo, Shin Gunto koshirae resembles the old style of tachi koshirae that might have been used in the imperial court. Notably, as a way to improve morale and harken back to samurai traditions of a personal blade, the Shin Gunto koshirae was customizable to a considerable degree: officers could mount a family blade and have a custom saya with their color of preference created to fit it. This sword would appear to be an early type 98 Gunto made with high quality fittings. In addition to a traditional style ray skin handle and silk ito, along with a silvered habaki and seppa, the typical gilt brass fittings of high quality gunto koshirae are used, all with matching serial numbers noting the koshirae remains in original condition.

In addition to the antique family blade, other customizations include a brown lacquered saya. A blue and red tassel preserved in excellent quality denotes the blade belonged to a company grade officer (2nd lieutenant to captain in rank). A leather field cover for the saya, a rare find since most were lost in the war, protects the saya and is in overall excellent condition save for a crack near the munemachi.

The only significant flaws include the ashi having broken off and the lock mechanism not fully securing the blade. A spare ashi obtained from another antique gunto koshirae will be provided to allow for an easy repair should the sword be bought at full price.

In the interest of maintaining full transparency and originality, the replacement of the broken ashi has not been carried out and will be left to the choice of the new owner. Taking all this information into account, one might surmise that this blade belonged to a young officer from a samurai family, upon going to war, a family blade was taken as his sidearm, and due to its remarkably well-preserved state, and the fact this is one of the few blades that remained in Japanese custody, it is likely the owner and his sword were lucky enough to return home.

Whether youre a collector of antiques from pre-modern japan, or a collector of militaria you cant go wrong with this special sword. The blade is guaranteed to be an antique traditionally made Japanese sword in Gunto koshirae. A sword bag is provided as a complementary gift. The item "Edo Period Kanbun Katana Nihonto in WWII Gunto Koshirae Matching Serial Numbers" is in sale since Saturday, October 24, 2020. This item is in the category "Antiques\Asian Antiques\Japan\Swords".