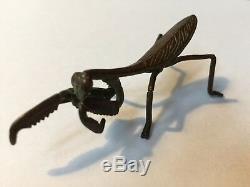 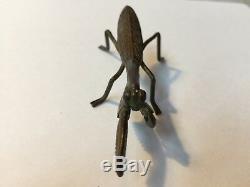 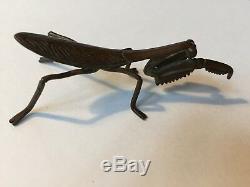 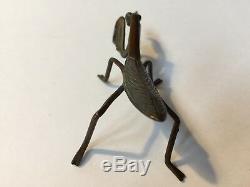 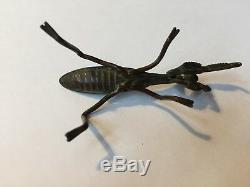 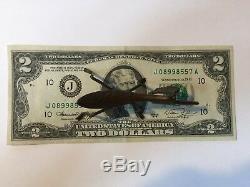 Lifesize praying mantis done in copper. Antique - exact age unknown. An Okimono may be a small Japanese carving, similar to, but larger than netsuke. Unlike netsuke, which had a specific purpose, such as securing items to a belt, Okimono were purely decorative and were displayed in the tokonoma. Praying mantis is an unusual, outstanding insect that has fascinated people since ancient times. This strange, remarkably looking bug is easily recognizable because of its long, somewhat angular body, folded front legs and triangular head. This interesting creature is so different from us, just as many exotic and local insect species are, so we keep being amazed by their elegant and specific moves. Praying mantises have been admired and worshiped in different parts of the world and there are many stories and interesting facts about them. In Kalahari Desert, for example, praying mantis has a status of deity and it is considered one of the oldest gods for Bushmen people. In fact, they think of praying mantis as an incarnation of the supreme god who rules over the world.

If they see a praying mantis in wild, they would always try to interpret its behavior as a hidden message from heavens. Praying mantises have a high status in ancient Chinese tradition, as well.

Chinese people admire praying mantis for its sophisticated, slow and elegant motion. They consider this divine insect patient and contemplative. They believe praying mantises are true masters of higher knowledge and wisdom, since they are a natural example of balance, which is seen in their calm behavior. Praying mantis symbolism and meaning Praying mantis is an insect inhabiting almost all corners of the world, but most of the species inhabit tropics. It is a common insect and yet it still fascinates us every time we see it.

Praying mantis appears strange and unusual to many, repulsive to those particularly sensitive to bugs or individuals who suffer from phobias related to insects. However, we must admit this creature looks incredible, almost like an alien.

Praying mantis is truly impressive creature. It looks like it is praying, because its front legs are folded in a manner that mimics humans praying gesture. Its motion is slow and gentle, sophisticated. Praying mantiss actions are always carefully thought through and calculated.

It never strikes its prey too early or does something in rush. Female praying mantis also has a particularly nasty habit; it often devours its partner after mating. This phenomenon is interesting in both biological and symbolical sense. Intuition and clairvoyance Praying mantises are considered very well balanced creatures. It is something in their tranquil motions that make us think of them as mystical and divine.

In many societies, praying mantis is considered an important messenger of the forces unknown to our mind; energies and vibrations we are not meant to consciously comprehend and understand. It is believed praying mantis has a secret connection with the Unknown. Praying mantis symbolizes intuition and clairvoyance. Chinese, Japanese, Korean Peninsula people and other familiar peoples would keep them as pets and examine their fascinating silent movement that possibly hides patterns of some greater power running through their bodies.

Did you know praying mantis is actually one of the most intelligent insects on our planet? They are cold blooded and extremely patient hunters, always planning before an attack.

Apart from that, praying mantis is fearless creature and it hunts other bugs and prey with almost one hundred percent success. To achieve such result, they have to be smart enough. They are a great example of highly intelligent insects. They represent awareness of the greater purpose in life, of the importance of destiny and natural chain of events. Did you know there are martial arts styles developed by model of Chinese praying mantis moves?

There two of such styles and they both mimic Tenodera sinensis (Latin classification name for Chinese praying mantis) moves. These martial art styles are quite old; they are created around mid-seventeenth century and both are kung-fu sub-styles. In Greek language, term mantis stands for a prophet. These insects have folded front legs that make them look as if they are praying. Christian tradition has the same interpretation, as well as Islam.

However, the real purpose of their special forelegs is to catch their prey. In France, it was believed praying mantises were magical creatures helping lost children.

According to old French folklore, if a lost child sees a praying mantis, the insect would point it to the direction of their home. In many African traditions, praying mantis is a lucky bug; it is a symbol of good fortune. Therefore, some African peoples believe it is a good sign if a praying mantis lands on your body.

Bushmen believe praying mantis possesses magical powers, so their feelings for this creature are ambivalent. They would rather not touch the insect. In Japanese folklore, praying mantis has a dual meaning. It could be interpreted as a symbol of great courage and fearlessness, but also cruelty and merciless.

The item "FINE Antique, Japanese/Japan Copper Okimono Netsuke Praying Mantis Lifesize" is in sale since Thursday, November 15, 2018. This item is in the category "Collectibles\Cultures & Ethnicities\Asian\1900-Now\Japanese\Netsuke".

The seller is "maskmonger" and is located in Freeport, Maine. This item can be shipped worldwide.