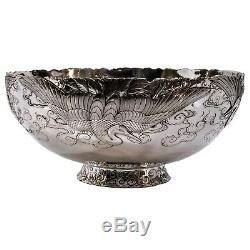 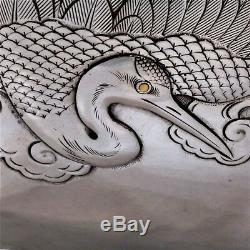 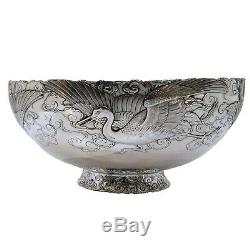 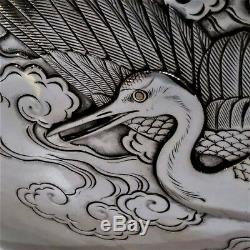 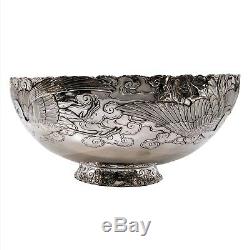 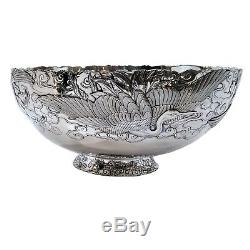 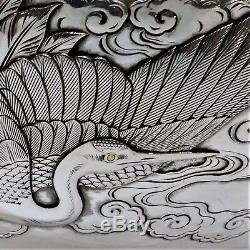 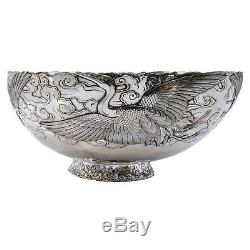 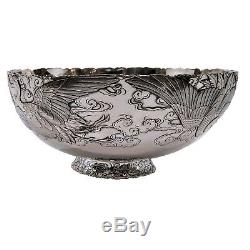 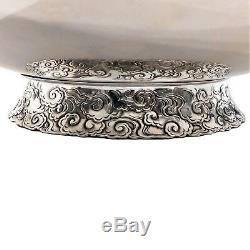 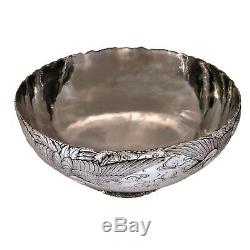 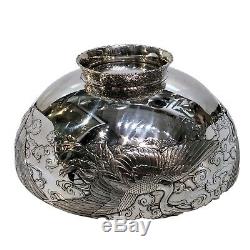 FINE ANTIQUE SILVER & GOLD/ MIXED METAL BOWL, MEIJI PERIOD, JAPAN. This exceptional antique Japanese silver bowl is of hemispherical shape and supported by a spreading pedestal foot. The craftsmanship and artistry are superb and it has been beautifully ornamented, using repousse and chased techniques. The scene depicts cranes flying through a cloudy sky and the eyes of the birds have been inlaid with gold. The bowl was made in the Meiji period, when the Japanese metal workers were undoubtedly the best in the world, and dates to the last few years of the 19.

Century or the first few years of the 20. As with all great Japanese art, there is a profound sense of space which has only been achieved through great planning, care and forethought. The foot of the bowl has been ornamented with clouds.

Delicate hammer strokes have been used around parts of the design to create a pitted surface, deepening the shadows which contrast ethereally with the plain surfaces. The spread of the foot allows the clouds to reflect in the underside of the bowl above and this reflection creates a slightly different effect, as the image is reversed and has been distorted; changed in size and softened by the bowls convex surface. This, together with the clouds to the upper portion, gives a vast sense of space, almost as if the sky extends throughout the whole bowl from the rim of the bowl to the very edge of the foot, presenting a bank of cloud above and below an otherwise clear and shining sky. The unadorned silver, that most reflective of metals, is naturally constantly reflecting back the ever-changing light surrounding it, producing a range of effects as the lights intensity and direction shifts.

The lower edge of the foot and the rim of the bowl are not straight but deckled, following the lines of the ornamentation, extending the vast and seemingly borderless and uninterrupted, panorama of sky. The ornamentation to the body of the bowl starts gently about a third way up the body, with just a few curls of cloud drifting down from under the flying cranes. The body of each crane has been positioned slightly differently and each flies in a different direction and at a slightly different elevation. The bodies of the cranes have been detailed with great precision; the chasing is magnificent with the weight and direction of each stroke executed with absolute consistency and mastery. The skin of the legs, fine feathers to the necks, feathers to the upper bodies and crests have all been differentiated by chasing them in a specific way and the subtle detailing around the gold eyes is masterful. The widespread wings are magnificent with the central quill of each feather and the surrounding filaments rendered in a relentlessly consistent way. We have been unable to find any makers mark but the bowl has been stamped to the underside of the base with a French import mark from the Marseilles assay office, which was introduced on 29. June 1893, for articles with a minimum fineness of 800/1000. This stamp was applied to silver goods imported from a list of contracting countries (including Japan). Japanese silver is usually of a very high grade and 950/1000 fineness.

The design may have been inspired by a kamon (mon) which are stylised emblems within a circular frame which were used in a similar way to European heraldic crests. The swords were decorated with the pattern of a crane within a circle (tsuru-maru) and later, the crane pattern came to be widely used for family crests. From Family Crests of Japan ICG Muse, Inc. 2001 It is highly probable that this bowl was commissioned by, or as a gift for, someone who used a crane crest.

In Japan, the crane or tsuru(Grus Japonensis), also known as the red-crownedcrane, is often referred to as the Bird of Happiness. They are regarded as a very auspicious symbol in Japanese culture, representing good fortune, fidelity, longevity, purity, peace and eternal youth. Cranes are also revered as one of the three mystical or holy creatures and believed to have a lifespan of a thousand years. Legend says that the Immortals had the magical ability to transform themselves into cranes in order to fly on various journeys. It is also believed that cranes lifted people up to the realms of enlightenment and that their powerful wings carried souls up to heaven. The Japanese cranes are colossal and one of the largest flying birds but they are also exquisitely graceful and awe-inspiring.

They inhabit wetlands and their long legs make them well equipped for wading, whilst their long necks and long sharp-pointed bills are ideal for feeding on plant tubers and the small animals in the muddy water. Their stature, beauty and spectacular courtship dance have made the crane a focus of legend, mythology and symbolism.

Cranes are often depicted on wedding decor, since they aremonogamous andbelieved to partner for life, so they are frequently embroidered on uchikake, the formal wedding kimonos. A thousand paper origami cranes (Senbazuru), held together by strings, are traditionally given as a wedding gift by the father of the bride, who is wishing a thousand years of happiness and prosperity upon the couple.

They can also be given to a new baby for long life and good luck. Hanging them in ones home is thought to be a powerfully lucky and benevolent charm. One of the first books ever published on Origami, released in the late 1700s, was How to Fold 1,000Cranes.

In recent times, popularized through the story ofSadako Sasaki, they have also become an international symbol for peace. Sadako was a Japanese girl who was exposed to radiationduring theatomic bombing of Hiroshima during World War II, when she was only two years old. Shortly afterwards, she developed leukaemia and spent significant periods of her childhood in Hospital.

At the age of twelve, she was inspired by the ancient senbazuru legend, which promised that anyone folding a thousand origami cranes would be granted their wishby the Gods. Sadako started making origami cranes with the goal of making one thousand of them before she died. After her death, on 25th October 1955, her life story was fictionalised in the book, Sadako and the Thousand Paper Cranes. Several Japanese temples, including theHiroshima Peace Memorial Museum, have eternal flames burning for world peace. At these temples, school groups or individuals often donate. Senbazuru to aid the prayers desiring peace.

The strings of paper cranes are hung outside and left exposed to the elements, slowly dissolving and becoming tattered. It is believed that the hopes, good wishes and prayers are released over time, while the birds slowly disintegrate. Please message me with any queries. Thank you for looking and dont forget to check my other listings for antique European, Indian, Middle Eastern, Chinese and Asian silver. If you are looking to sell, please contact me with details.

The item "FINE ANTIQUE SILVER & GOLD/MIXED METAL BOWL, MEIJI PERIOD, JAPAN" is in sale since Monday, May 14, 2018. This item is in the category "Antiques\Silver\Solid Silver\Boxes". The seller is "jcohenantiques" and is located in London. This item can be shipped worldwide.