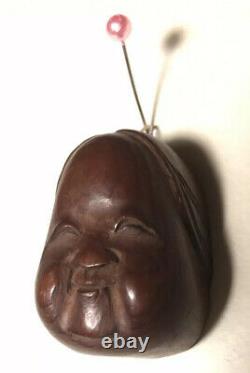 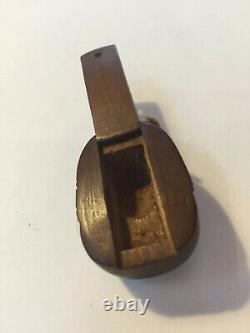 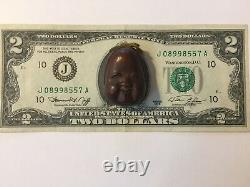 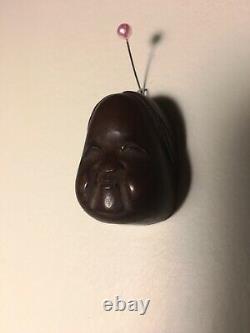 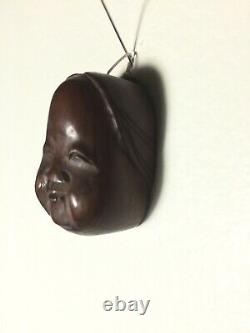 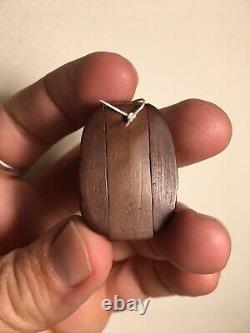 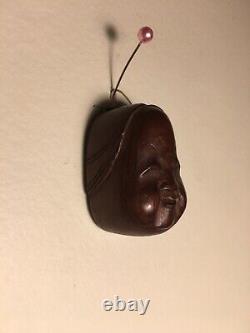 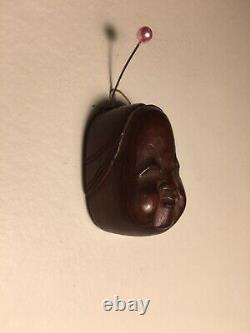 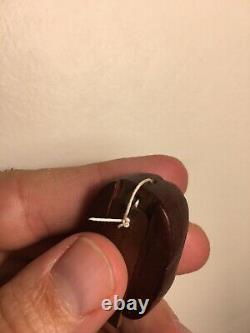 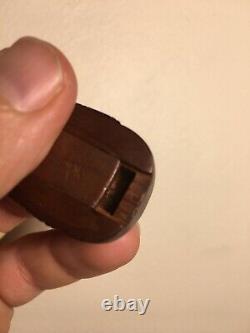 Here is an example of fine art from Japan. A quality, used, Netsuke with Patina from Japan. Appears to be carved in a Yew wood; done in a traditional Ichii-itto-bori Technique to highlight the rich grains.

Ichii-itto-bori carving is a woodcraft technique that involves carving yew wood using only chisels, and was developed by a netsuke master, Matsuda Sukenaga. Matsuda was from the Hida region of Japan. Ichii-itto carving is characterized by a fine grain, due to the growth rings of the yew tree which are very fine. Carving techniques inherited by craftsmen of this area date to the 5th and 6th centuries, with wood carving in the Hida province being conceived and produced by a group known as the Artisans of Hida. At one period in time, these craftsmen were involved in construction work in Kyoto, in which Itto bori-style carving was employed in temple architecture, statue carvings (Buddha).

Today, the wood from the precious Ichii Japanese Cedar (Cryptomeria), tree is still used to make items for the Emperors coronation ceremony. The origin of the name of the tree, Ichii, is from a story told concerning the Heiji Emperor. About 800 years ago, when the Emperor was presented with a Yew wood carving, he greatly appreciated the superior quality of material (Ichii) and the exemplary craftsmanship. The wood so out-shined other wood products that the Emperor gave the tree the bureaucratic status called Shoichii, the highest title (later its academic name became formally Ichii).

At the end of the Edo Period (1868), Sukenaga Matsuda was considered the Japanese Van Gogh because of the sharp cuts he created in his amazing Itto bori-style carvings. Matsuda established the unique craft of Ichii Itto bori (single cut yew-wood carving) in netsuke, by using 40-50 different kinds of chisels in which the wood, after carving, was never stained, (only oil-finished), so as to emphasize the unparalleled beauty of the yew grain. Matsuda became a mentor to many wood carvers as represented in this piece. Character is an Okame is a happy satisfied woman... Often depicted with a cat. Okame, also known as Uzume or Otafuku is the name for the female counterpart of a traditional Japanese Kyogen theater pair. She is considered to be the goddess of mirth and is frequently seen in Japanese art. Her full cheeks and merry eyes are an unforgettable sight and a delight to behold. Some Japanese scholars theorize that long ago, when the first Okame masks were created, they may have represented an idealized form of feminine beauty. Styles and tastes are subject to change, and the ancient Japanese might be surprised to learn that the name Okame is today sometimes used as a less-than-appreciated joking taunt by Japanese husbands. In contrast, a famous and contemporary Japanese Kyogen actor once commented that the countenance of Okame is what every man hopes his bride will look like on his wedding night. Most Okame's have black-teeth.. Is a custom of dyeing one's teeth black.

It was most popular in Japan until the. Dyeing was mainly done by married women, though occasionally men did it as well. It was also beneficial, as it prevented tooth decay, in a similar fashion to modern.

In Japan, it had existed since the prehistorical ages, and was seen among the civilians until the end of the Meiji period. Pitch black things such as glaze like lacquer were seen as beautiful.

He main ingredient was a dark-brown solution of. Made by dissolving iron filings in vinegar.

The solution is combined with vegetable tannins from sources such as gallnut powder or tea powder, to turn it black and non-water soluble. The item "Finely Carved Antique Wooden Japanese Netsuke Mask Okame (Otafuku) Mennetsuke" is in sale since Friday, November 16, 2018. This item is in the category "Antiques\Asian Antiques\Japan\Netsuke".

The seller is "cosmic_goods" and is located in Freeport, Maine. This item can be shipped worldwide.