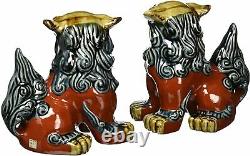 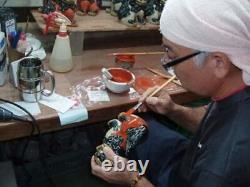 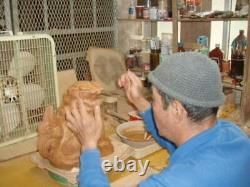 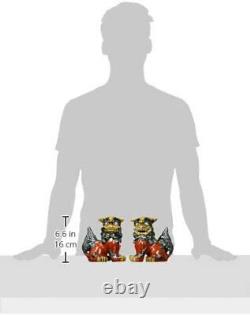 Japan Okinawa Neutral Shisa Kamiyaki Male and Female Set H18× W15 × D12.5cm from Japan 1039. 100% genuine products have been released in Japan. A work of the Ryukyu-yaki kiln "Nakagusuku kiln". It is a kiln with the characteristic of correctly inheriting the traditional technique of Ryukyu ware, which is powerful, simple and splendid with the elements of East Asian pottery, and considering the harmony with new elements, while making the best use of the individuality of Okinawan pottery clay. Shisa has long been worshiped as a talisman and a symbol of protection, and is displayed on roof tiles, gate posts, entrances, and alcove. The custom of excluding Shisa from monsters and disasters is believed to be due to China's Feng Shui Thought. The lion is called "Shisa" in Okinawa, and it has been popular since ancient times for looking far away from the place where it was enshrined, driving away disasters and monsters, and attracting happiness. It is said that the Shisa culture entered China from the western region via the Silk Road from the Middle East, and was introduced to Okinawa during the Ryukyu trade era, and there is a theory that it originated from the statue of Sphinx in Egypt, a country far away from the Orient. The size and weight of the main body are displayed for one body. Kamiyaki is a product that is completed by unglazed once, then underpainted with glaze and then main-baked. Red solid is the one that is fired for the third time after applying red solid (overpainting) to the body part. It is a gem that took a lot of time and effort, created by firing three times. As this is a handmade product, the color, shape, size and weight may differ slightly from those shown. I send a product by DHL. Thank you for considering the product!

This item is in the category "Antiques\Asian Antiques\Japan\Other Japanese Antiques". The seller is "kamken_8534" and is located in this country: JP. This item can be shipped worldwide.