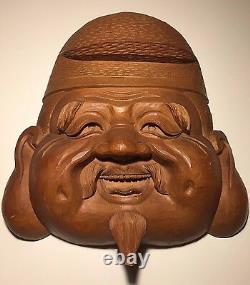 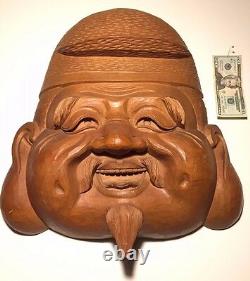 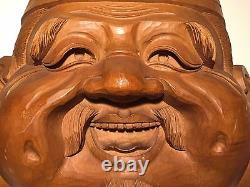 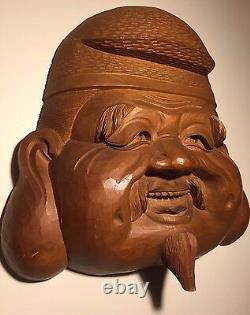 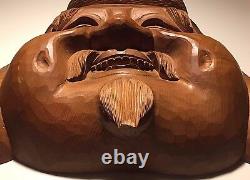 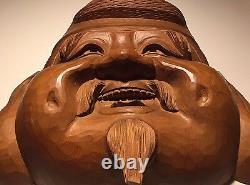 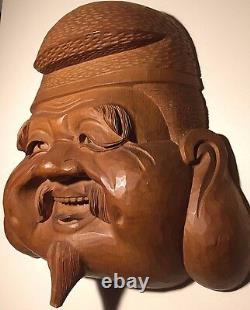 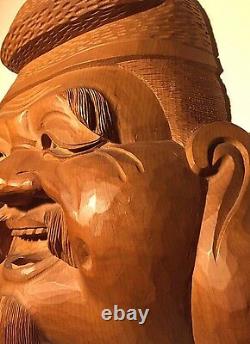 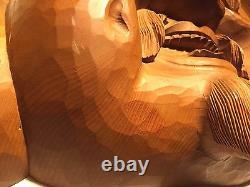 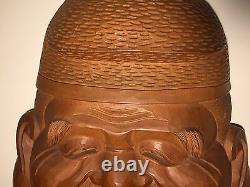 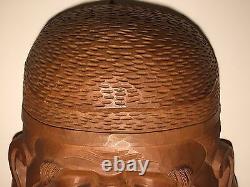 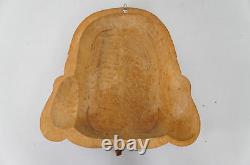 Quality, Antique, ca1950, Japanese Wooden Mask of Ebisu one of the Lucky 7 Gods! The character seen here "Ebisu" is the patron of fishermen and favours them with a good catch. He also ensures safe journeys for all seafarers since he himself arrived into Japan from the sea.

In the countryside, he is considered a guardian of the rice fields and agriculture in general. Land merchants, caterers, farmers and other tradesmen have adopted Ebisu for prosperity in return for their hard work. All this makes him the most popular of the seven gods.

The fish either dangles from a rod in his right hand or is carried under his left arm. Ebisu has a cheerful smile behind his neat beard and wears a pointed hunter's cap (kazeori eboshi). Ebisu is the son of Daikoku and they are often depicted together in carvings and paintings. Carved in a high quality, aged, renown yew wood, overlaid with a light traditional shellac. Done in a traditional Ichii-itto-bori Technique to highlight the rich grains.

Ichii-itto-bori carving is a woodcraft technique that involves carving yew wood using only chisels, and was developed by a netsuke master, Matsuda Sukenaga. Matsuda was from the Hida region of Japan. Ichii-itto carving is characterized by a fine grain, due to the growth rings of the yew tree which are very fine. Ichii-itto carving was designated a traditional craft in Japan in 1975. The Japanese are obsessed with an items condition.

This piece only has found its way to America due to its faint, hairline, scuffs around the cheeks. The Japanese shichi (seven) fuku (luck) jin (beings) have been a popular group of deities since the Edo period (1603 and 1868).

Each lucky god (fukunokami) has a name: Shichifukujin Shichifukujin Ebisu Daikoku Benten Fukurokuju Hotei Jurojin Bishamon. Seven has been an auspicious number for thousands of years in countries around the world, and Japan is no exception. There are seven basic principles of the Samurai's philosophy (bushido), the Japanese Star Festival tanabata is on the seventh day of the seventh month, a baby's birth is celebrated on the seventh day, a death is mourned for seven days, and again after seven weeks. In Buddhism, the main'religion' of Japan, people believe in seven reincarnations.

So it's not surprising that there are seven gods in the shichifukujin. Seven comical-looking characters, mostly with chubby faces and big grins. They come from different parts of Asia (mainly China, India and of course Japan) and from different religions (mainly Brahmanism, Buddhism, Taoism and Shintoism). Although most of these characters have a courtly or scholarly appearance, they were popularised by farmers, merchants and artisans. Consequently their treasures are practical things like rice, fish and cash, rather than gold or jewels.

Special focus is placed on these seven deities in the New Year. Traditionally, before going to bed on New Year's Eve, children place a picture of the gods under their pillow to ensure a happy and prosperous New Year. But this juvenile custom and the doll-like effigies are not just the domain of children.

During the first seven days of the year, whole families will visit temples and shrines to pay their respects to the shichifukujin. Many of these places are dedicated to just one of the gods, so people often make a tour of seven shrines to see them all, to ensure they benefit from all types of luck.

This pilgrimage tour (shichifukujin meguri) is not restricted to the New Year and usually takes place in the same neighbourhood. The tradition has been popular since the beginning of the Edo period (17th century).

Now, there are about twenty such groups of seven shrines in Tokyo alone and are over one hundred in Japan as a whole. Light inconsequential scuff marks (most notably on left ear-lobe and left cheek areas).

This is BIG for a mask e. 20 inches x 20 inches x 10 inches. See my other masks for sale, including several of my other Japanese masks. Check out my other items. Quality, Antique, ca1950, Japanese Wooden Mask of Ebisu Lucky 7 Gods" is in sale since Tuesday, June 6, 2017.

This item is in the category "Antiques\Asian Antiques\Japan\Masks". The seller is "cosmic_goods" and is located in Freeport, Maine. This item can be shipped worldwide.