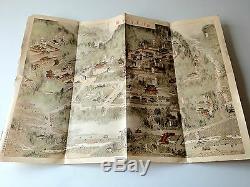 Old drawing of the Nikko toshogu which drawn before the war. 15.35 x 20.95 inch size. Tsh-g is dedicated to Tokugawa Ieyasu, the founder of the Tokugawa shogunate.

During the Edo period, while Ieyasu's son Hidetada was shogun, it was enlarged during the time of the third shogun, Iemitsu. Ieyasu is enshrined here, and his remains are entombed here. During the Edo period, the Tokugawa shogunate carried out stately processions from Edo to the Nikk Tsh-g along the Nikk Kaid. The shrine's annual spring and autumn festivals reenact these occasions, and are known as processions of a thousand warriors. Five structures at Nikk Tsh-g are categorized as National Treasures of Japan, and three more as Important Cultural Properties.

Two swords in the possession of the shrine are National Treasures, and numerous other objects are Important Cultural Properties. Famous buildings at the Tsh-g include the richly decorated Ymeimon, a gate that is also known as higurashi-no-mon. The latter name means that one could look at it until sundown, and not tire of seeing it. Carvings in deep relief, painted in rich colors, decorate the surface of the structure. The next gate is the karamon decorated with white ornaments.

Nearby, a carving of the sleepy cat, "Nemuri-neko", is attributed to Hidari Jingor. The stable of the shrine's sacred horses bears a carving of the three wise monkeys, who hear, speak and see no evil, a traditional symbol in Chinese and Japanese culture. The original five-story pagoda was donated by a daimyo in 1650, but it was burned down during a fire, and was rebuilt in 1818.

Each story represents an element - earth, water, fire, wind and aether or void - in ascending order. Inside the pagoda, a central shinbashira pillar hangs from chains to minimize damage from earthquakes. Hundreds of stone steps lead through the cryptomeria forest up to the grave of Ieyasu.

A torii at the top bears calligraphy attributed to Emperor Go-Mizunoo. A bronze urn contains the remains of Tokugawa Ieyasu.

Please pay within 5 days after action is finished. Due to the Post Office's close of business on weekend.

I do not accept any return without my approval. All goods must be return in original condition without any physical changes. International Buyers - Please Note. These charges are the buyers responsibility. We do not mark merchandise values below value or mark items as gifts - US and International government regulations prohibit such behavior.

The item "Nikko Tosho-gu map drawn before war Japan Old Vintage print temple Tokugawa" is in sale since Sunday, November 18, 2012. This item is in the category "Antiques\Asian Antiques\Japan\Prints". The seller is "gomezsan" and is located in Nippon. This item can be shipped worldwide.