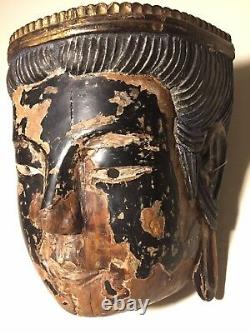 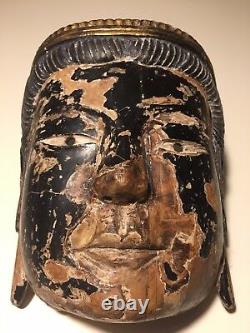 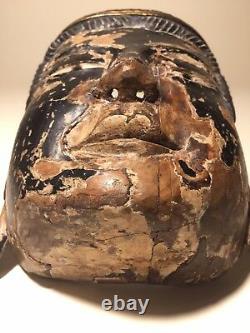 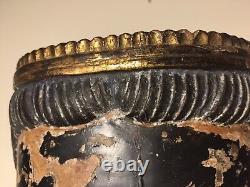 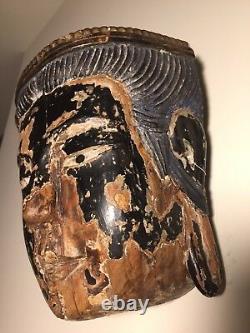 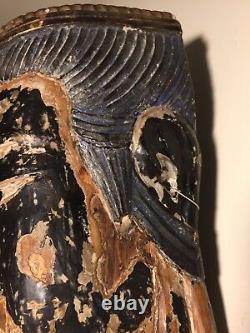 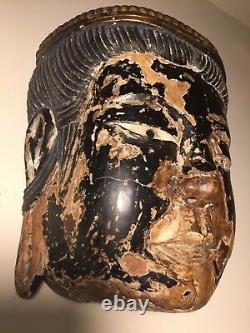 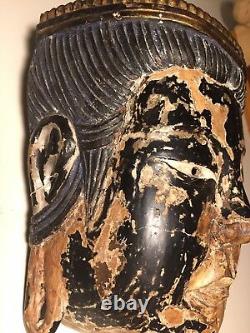 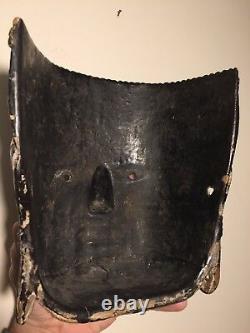 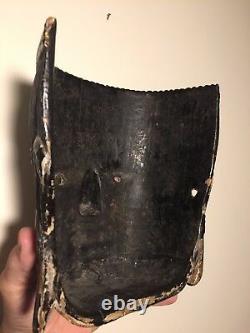 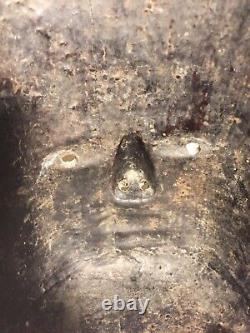 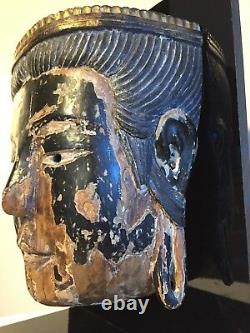 This is an extremely old antique Japanese Buddha Mask. See the Natural Museum in Japan to see what I mean about the unchanged techniques, natural pigments and difficulty in actually judging age. Its also a reminder to us westerners that wooden masks actually can last this long.. Faint evidence of the Buddha's blue hair still remain (See pictures). While there is some thick patina on the back of the mask from its prior dance and use, the majority of the thickness on the reverse of the mask is in fact the same shellac-like dark-coating that is also seen on the front of the mask over areas such as the upper portions of the ears.

What also attests to the piece's age and use are the off-round string-holes of the mask, that over dozens (more likely hundreds) of performances, worn into the securing holes. The piece is also designed in weight (thinly carved) and ergonomics of wearing in mind (see recessed nose).. Holes in the eyes so the dancer could see where they were at on the stage and nostril holes to assist in gasping enough air. The mask is skim-coated in a light layer of gesso which is made up of crushed shells (usually oysters) and glue derived from animal-bones; a gilded crown on top.

The Muromachi period (Muromachi jidai, also known as the Muromachi era, the Ashikaga era, or the Ashikaga period) is a division of Japanese history running from approximately 1336 to 1573. The period marks the governance of the Muromachi or Ashikaga shogunate (Muromachi bakufu or Ashikaga bakufu), which was officially established in 1338 by the first Muromachi shogun, Ashikaga Takauji, two years after the brief Kenmu Restoration (133336) of imperial rule was brought to a close. The period ended in 1573 when the 15th and last shogun of this line, Ashikaga Yoshiaki, was driven out of the capital in Kyoto by Oda Nobunaga. From a cultural perspective, the period can be divided into the Kitayama and Higashiyama periods (later 15th early 16th centuries).

The early years from 1336 to 1392 of the Muromachi period are known as the Nanboku-ch or Northern and Southern Court period. This period is marked by the continued resistance of the supporters of Emperor Go-Daigo, the emperor behind the Kenmu Restoration. The proximity of the imperial court to the bakufu resulted in a commingling of imperial family members, courtiers, daimy, samurai, and Zen priests. Art of all kindsarchitecture, literature, Noh drama, Kygen (comedy), poetry, sarugaku (folk entertainment), the tea ceremony, landscape gardening, and flower arrangingall flourished during Muromachi times. Bugaku , court dance and music is the Japanese traditional dance that has been performed to select elites mostly in the Japanese imperial court, for over twelve hundred years.

In this way, it has been known only to the nobility, although after World War II, the dance was opened to the public and has even toured around the world in 1959. The dance is marked by its slow, precise and regal movements.

The dancers wear intricate traditional Buddhist costumes, which usually include equally beautiful masks. The music and dance pattern is often repeated several times; It is performed on a square platform, usually 6 yards by 6 yards. As Japanese emperors where descended from Amaterasu, royalty and divinity often are closely associated. When Buddhist culture came over to Japan from Korea and China in the seventh century, it brought dance-drama traditions that involved intricate costumes and processions.

Bugaku court dance draws heavily from the Buddhist imported culture, but also incorporates many traditional Shinto aspects. These influences eventually mixed together and over the years were refined into something uniquely Japanese, bugaku. Gagaku is the court music that goes beside the bugaku court dance. Tadamaro Ono is a palace-musician whose family has been performing for the emperors of Japan for almost twelve hundred years.

This makes him the thirty ninth generation in an unbroken family line of gagaku court musicians. Musicians have to be thoroughly involved with focused minds and bodies so they are engaged in the same way the dancers are. The traditions of gagaku and bugaku are the oldest known surviving court dance and music in the world. Other court dances/musics, including the original influences on bugaku, have long since died out. With all of the new, modern culture flourishing in Japan, one may be surprised that such an ancient and slow tradition has survived.

Some people note that Japanese culture is ever accommodating and expanding. So while accepting new culture, Japanese people feel a sense of duty to keep such traditions alive. Why does the peice have such elongated ear lobs you ask? On both ancient and modern Buddha statues in all cultures the earlobes are depicted as elongated and usually pierced. Most Buddha statues are meant to be symbols of the enlightened state as much as portraits of the Buddha himself.

However, the elongated ear lobes on statues are the survival of a distant memory of what the Buddha actually looked like. In ancient India men and women commonly wore ear plugs; children's ear lobes were pierced and a small clay cylinder was put in the holes. As the child grew, increasingly large cylinders were put in the lobes until they had stretched enough to accommodate plugs with diameters of up to 6 centimeters. What are the physical traits of buddha and why is the blue hair? Firstly, let us be clear that this is more a question related to iconography and art history than to Buddhism.

Secondly, I know of no serious attempts by Buddhist commentators or art historians to explain the spiraling curls on Buddha images. And thirdly, the Tipitaka offers no authentic information about the Buddhas hair other than to say that it was black (kalakesa) and that he cut it off when he renounced the world to become a monk. Although it is not mentioned anywhere in the Tipitaka, we can safely assume that the Buddha shaved his head like all other monks. Depictions of him with hair, is an iconographical convention without historical basis. So where did the spiraling curls come from?

The Lakkhana Sutta and several other suttas are devoted to the concept of the 32 Signs of a Great Man (mahapurisalakkhana), a rather strange idea introduced into Buddhism at a later period. One of these signs pertain to the hair. The relevant passage reads as: "Uddhaggani lomani jatani nilani anjanavannani kundalavattani padakkhinavattaka jatan" Which, word for word this means uddhaggani = turns around or upwards, lomani = hair, nilanianjanavannani = black in color similar to collyrium, kundalavattani = curled, and padakkhinavatta = turning to the right. So according to the sutta, the Great Mans hair was black and curled upwards and to the right.

It was probably thought to curl the right because the right has been, in nearly all cultures, considered more auspicious. Being the color of collyrium is interesting. The Pali and Sanskrit word nila means black, blue or dark. Now collyrium as it is used in India, is made from the ash of fleabane, ghee and a few other ingredients and is a black greasy substance. In Mahayana sutras the nila gradually came to be understood as being blue. In the Gandhavyuha Sutras discussion on the signs of a Great Man it glosses nila as the color of the vairocana jewel which is blue in color. This is why Tibetan Buddha statues have blue hair. Anyway, when the first sculptors made Buddha statues they tried to depict at least some of the 32 signs. It is thought that the first Buddha statues were made in Gandhara under Greek influence, and in Mathura, in around the 1st/2nd centuries CE. Greek or Greek-influenced sculptors in Gandhara, perhaps more rooted in reality, depicted the Buddhas hair naturalistically as, not exactly curling to the right, but waving to the right.

The first Mathura-manafactured Buddhas show him with a single bun spiraling to the right, something like a Mr. The Gandhara style never penetrated into India proper and eventually died out. The spiraling Mathura style eventually evolved into many spiraled curls and the Buddhas hair has been depicted in that manner ever since.

There are no extant representations of the Buddha represented in artistic form until roughly the 2nd century CE, partly due to the prominence of aniconism in the earliest extant period of Buddhist devotional statuary and bas reliefs. A number of early discourses describe the appearance of the Buddha, and are believed to have served as a model for early depictions. In particular, the "32 signs of a Great Man" are described throughout the Pali Canon, and these are believed to have formed the basis for early representations of the Buddha. These 32 major characteristics are also supplemented by another 80 secondary characteristics (Pali:Anubyanjana). In Mahyna Buddhism, including the traditions of Esoteric Buddhism, the 32 major characteristics and 80 minor characteristics are understood to be present in a buddha's sambhogakya, or reward-body. While most of the pictures taken are with the mask hanging on the wall, the piece is professionally mounted in a black and brass stand as seen in one photo. This is a museum-quality, culturally significant piece.