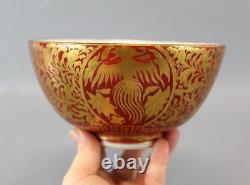 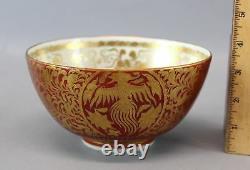 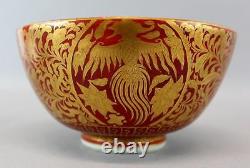 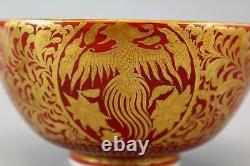 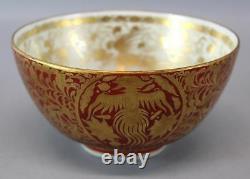 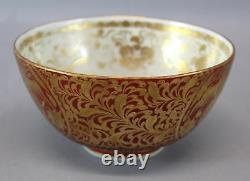 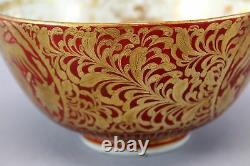 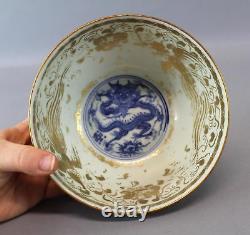 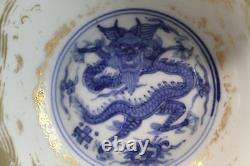 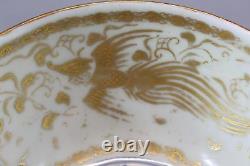 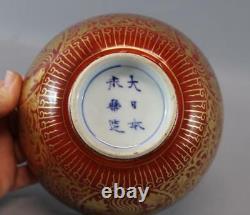 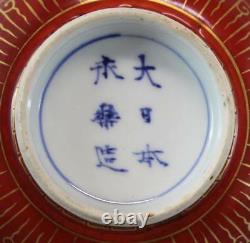 A very nice and rare Kinrande porcelain bowl made by one of the most praised Japanese porcelain masters - Eiraku Hozen most likely around 1830 and crafted in the. Chinese Ming dynasty Jiajing era style. This is a piece by one of "The Three Famous Potters of Kyoto, " Eiraku Hozen who spent his whole life and fortune perfecting his art and this style and dying penniless. He was the originator and masterer of this technique.

His works are in the Metropolitan and other museums all over the world. Not a single chip on the rim! The bowl is painted in underglaze cobalt blue, iron red glaze and richly decorated with gold paint.

The decorations depict flying phoenix birds and numerous flowers and floral motifs, while the inside bottom is painted in underglaze cobalt blue with a fine dragon. Some minor losses to gold / gilt leaf decorations on the inside, which are consistent with age and use. The bottom marked with an underglaze six character mark that reads. "Da Ni Pon Ei Raku Zho" - Made by Eiraku Japan. For a similar bowl, check an early 19th century Kinrande style bowl, Eiraku Hozen, Kyoto, Japan, crafted c. 1830, porcelain, underglaze blue, red enamel, gilding, currently exhibited at the - Montreal Museum of Fine Arts, Canada. Kinrande style bowls were extremely popular both in China and Japan during the Chinese Ming dynasty era and a number of such pieces were produced at both places to satisfy the needs of the market.

Absolutely scarce and rare collector piece and one of the rare antique porcelain bowls and objects. The bowl is a large piece measuring a 17cm (6.7") in diameter and 9cm (3.55") in height.

The piece is guaranteed antique and authentic. At first, he was a "kasshiki", an attendant charged with announcing mealtimes to the monks, working under Daiko Sogen at Daitoku-ji Temple. However, with Daiko Sogen's help, he became an adopted child of Ryozen when he was around 12 or 13 years of age. After that, he researched the making of pottery, and in 1817 (14th year of the Bunka Era), he succeeded to the name of Zengoro. Then, in 1827 (10th year of the Bunsei Era), he, along with his father Ryozen as well as others such as Kyukosai Sosa and Raku Tannyu, were called upon by Lord Kishu-Tokugawa and engaged in Kishu Oniwayaki pottery. He was bestowed the signatures of "Eiraku" and "Kahin Shiryu" by Lord Harutomi, and since then he began to use "Eiraku" for his signatures, etc. In 1843 (14th year of the Tenpo Era), he left his business to his son Sentaro (who will later become Wazen) and took on the name Zennichiro. However, he left behind many remarkable works created even after this point in time. In 1846 (third year of the Koka Era), he was granted the name and signature of "Tokinken" by Prince Takatsukasa. In his later years, he took on the name of Hozen and proceeded to Edo. After that, he did not return to Kyoto and founded Konanyaki pottery at Omi. At one point, he was summoned by Lord Nagai of Takatsuki and was active in various regions in Takatsuki, making pottery such as blue and white sometsuke pottery. In terms of style, he mainly produced items used for tea and daily necessities, using styles such as the gold brocade kinrande style, blue and white sometsuke pottery, the Annan style, Cochi pottery and the Shonzui style.

He highest appraised market value of art was over 3,000,000 JPY. Kinrande (meaning gold brocade) is a style of porcelain popularised in China during the middle years of the Ming Dynasty.

This style became a popular export to Japan and was distinct for its dazzling, intricate and colourful decoration. It was called gold brocade in reference to textiles woven through with gold thread to produce a luxurious gold pattern on a coloured ground. This technique however, did not originate in the Ming period, rare porcelains from the Ding kilns of the earlier Song Dynasty already featured golden decorations.

Although the wares were produced with the purpose of export for the Japanese market, this style of porcelain was very popular with the Middle Eastern traders as well. These wares generally tended to be of fine quality, with a thin, even glaze. Furthermore, the underglaze blue was of a very fine quality typical of Chinese Doucai. The Japanese-influenced decoration patterns included floral patterns such as chrysanthemums and were found predominately in red, blue and golden colour. The pieces can be recognised by their distinctive coral-red ground enamel with gold leaf decoration.

These wares were costly to produce and required a very labour intensive process. The underglaze blue porcelain was enamelled all over with iron red and fired at high temperatures. Then a layer of gilded decoration was added onto the pieces, cut in sections from gold leaf and adhered with lacquer, then fired again at a lower temperature. A wide variety of marks were used on Kinrande ceramics of the Jiajing period.

Some were Imperial reign marks, others included the date, place of production and even messages of good luck and fortune. The item "RARE Eiraku Hozen Antique Japanese China Kinrande Porcelain Bowl Dragon Phoenix" is in sale since Saturday, July 21, 2018. This item is in the category "Antiques\Asian Antiques\Japan\Bowls". The seller is "vicbg" and is located in Wien.