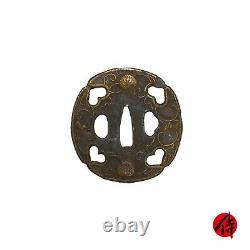 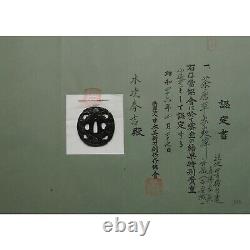 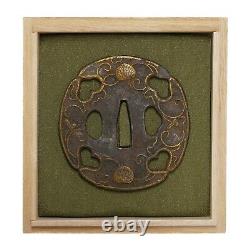 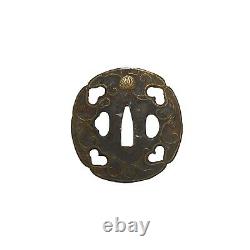 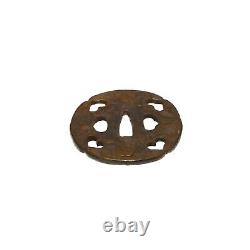 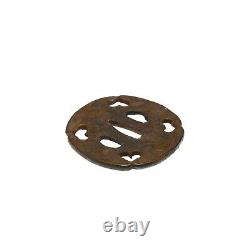 Heianjo-style, Cha Karakusa Zougan Tsuba. You would find four heart mark holes at each corner; these are the Inome??? This design has been used since ancient times, and it looks similar to the heart mark as mentioned above. As its name implies, the boar's eyes are the origin of this pattern. Some people believed that the Inome pattern would work as an amulet to protect them from evil spirits or fire.

Also, it was thought it would bring good luck. Leaves and vines and the rope pattern are inlaid with brass. Its golden coloring makes a decorative look for this work.

This type of plant pattern is categorized as the Karakusa?? And it is often seen in the Heianjo-style Tsubas.

It is a pattern in which stems and leaves of vines are twined and make curves. As ivy has a strong vitality and grows up without interruption, people regarded this design as a symbol of prosperity and longevity. This Tsuba is recognized by The Society for Preservation of Japanese Art Swords, which is known as NBTHK. According to the certificate, this Tsuba was made by a Heianjo??? The Heianjo-style was established in Yamashiro?? This school's Tsuba is mainly made of iron with brass inlay. Its design was simply a family crest or arabesque patterns in the beginning. Later, they made different Tsuba shapes and started using gold, silver, or copper for inlaying. As this item is an antique, please check each photo and ensure its condition.

Tsuba is the hand-guard of the Japanese sword. High-class Samurai wore his katana sword with its beautiful sword mountings such as Tsuba.

The front design of Tsuba tends to be more decorative as this part was often seen by other Samurais when he was walking on the streets. Please note that These photos are an example of display.

Tsuba stand is NOT INCLUDED in this item. NBTHK Tokubetsu Kichou Ninteisho Certificate. BTHK, also known as Nihon Bijutsu Touken Hozon Kyokai (the Society for the Preservation of the Japan Art Sword), is one of the oldest Japanese sword appraising organizations in modern-day Japan. They authenticated the Tsuba on Apr 27th in the 46th year of Showa (1971).

They appraised it as Tokubetsu Kichou Kodougu, the Tsuba worth preserving for Japanese society. The purchaser will receive this original certificate as well. Please note that your use of e-bay is governed by the following terms. These Terms are between you and Samurai Museum and govern our respective rights and obligations.

Samurai Gift is not responsible for any lost package that is incorrectly addressed due to customer error. If you enter your address incorrectly, you are bound to inform us immediately (within 24 hours of your order). It will normally takes 5-14 days for the item to arrive at your given address after we dispatch it. Thank you for checking our item. If you are interested in antique Japanese sword mountings for sale, please. This item is in the category "Antiques\Asian Antiques\Japan\Tsuba".